Hope y'all are having a Happy Thanksgiving!!! Do y'all do turkey or ham? We do both, my folks make everything: turkey, ham, egg rolls(we're Filipino), deviled eggs, pies (pecan and pumpkin for DH), rolls, plus all the traditional fixings. DH's folks are more traditional. They're American, MIL even can tell you how far as she has a degree in Genealogy.

Do you go to your folks house, your DH or significant others folks house, or does everyone come to your house? We had everyone at our house once. It was a logistical nightmare. Plus, I tried to go all Martha Stewart and make the fixings from scratch. DH was like you should have just opened the cans. Didn't even say "Thank you" for all my hard work. So let me just say I'm not planning to do that again for a LONG, LONG time.

Do y'all dress up? We only did our first Thanksgiving as a couple. DH's family had Thanksgiving dinner in Idaho. Which was cool. Except we had to carpool with his folks(all the way from Texas) and then you have to realize he's the baby of 6 and almost everyone at that time had kids (just his 3rd sister and her DH and us didn't).

Now we're the only ones that don't. We've got to save up as Adoption vs. IVF is basically the same financially.

So for our first Thanksgiving my DH's aunt had sewn little hats and collars for everyone. We were all to wear black shirts so we would look like Pilgrims. Yes, you heard right I said Pilgrims. Let's just say DH was not having any of that. And mind you it was my FIRST Thanksgiving as a WIFE in a new family. So I went along with it and tried to talk DH into going along too. Let's just say when it comes to DH and his family I don't try to put my nose where it doesn't belong. 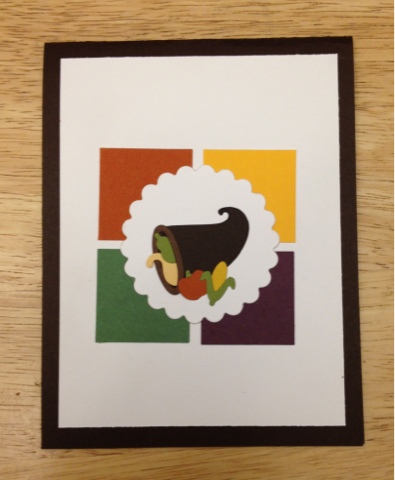 Happy Crafting,
M.E.
Lovingly created by cr8iveme at 9:43 AM